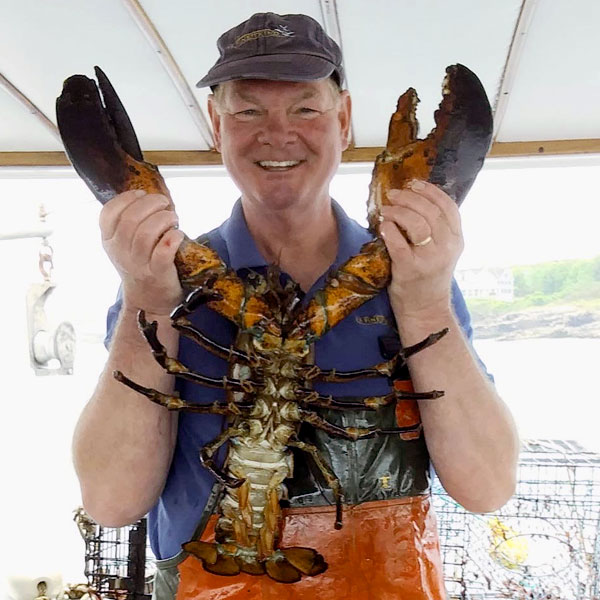 Captain Kevin began his marine career in the mid 1970’s working in the Gulf of Mexico on offshore oil rigs – his vessels were over 100 foot long cargo ships for drilling platforms and research vessels. He came to the Finestkind in the late 1980’s and has worked on the boats, off and on, ever since.

Kevin spent some time in Portland, Maine where he ended up delivering a vessel to Chicago via the St. Lawrence Seaway and Great Lakes; he has also found employment on urchin vessels. Kevin now splits his time between Ogunquit and North Conway NH, where he lives with his wife and son Thomas. 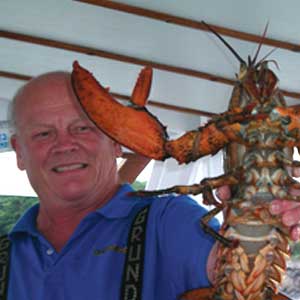 Captain Tom has been making children of all ages smile on the lobstering trips for many years, and we’re lucky to have him! Tom has lived all around the world including Germany, England and Iceland, but he says he “always wanted to live in a place like this” – meaning our beautiful place by the sea, Ogunquit. Tom also always wanted to be a fisherman when he grew up and feels he is living out his lifelong dream by boating and lobstering in Maine. In his spare time, Tom likes to live life to the fullest by going boating (big surprise!) and skiing.

Tom doesn’t have a lot of spare time however, because in the Fall he goes back to school at Lewiston High School and teaches Air Force Junior ROTC. This comes naturally to him, as he is USAF retired, 21 years. Tom is also a newlywed, being recently married to his sweetheart of fourteen years. 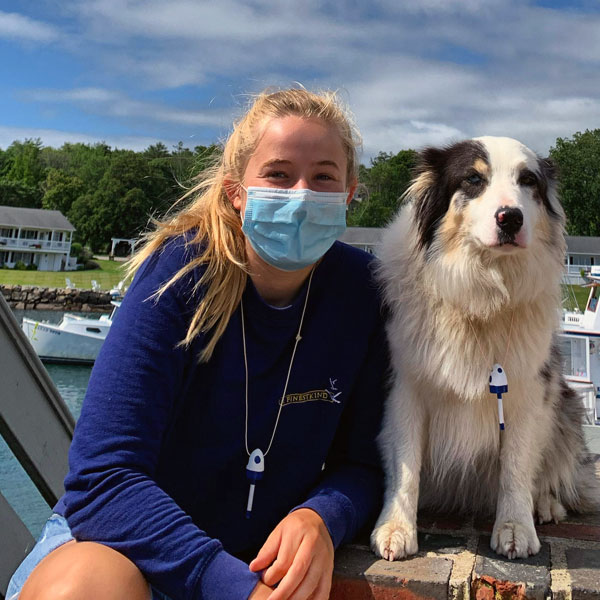 Although Lillian is an Ogunquit native, she grew up just down the road in Cape Neddick and is currently studying political science at the University of New Hampshire. Officially, Lillian started with us in 2018, but she began riding the boats at just three days old, thus holding the record for earliest training! Lillian loves to spend her days on the water, but she also devotes her time to activism with a focus on climate change. Lillian is an active member of Maine Youth for Climate Justice, which seeks action on the climate crisis in Maine. 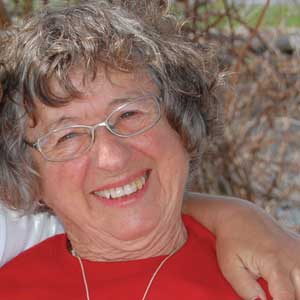 Co-founder and matriarch of the Finestkind, Eleanor has been living in Ogunquit ever since she hitchhiked up from New Jersey back in the day! She and her husband, Oscar, began taking folks out on trips from Perkins Cove back in 1956 and never looked back. Both former teachers, the pair eventually made The Finestkind a full time occupation and Eleanor is still responsible for keeping it all together to this day. 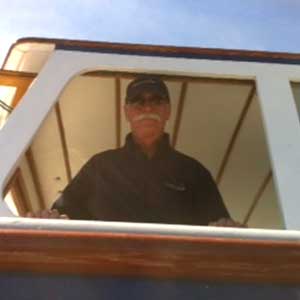 Bob is a retired high school P.E. teacher and coach, and was National High School Swimming Coach of the Year in 1996! He and his wife Donna now live on and love the coast of Maine. When Bob is not touring the coast of Ogunquit and York for the Finestkind; he enjoys studying the history and wildlife biology of the area, which he shares with passengers when he is captain on the breakfast cruise. Bob also enjoys SCUBA diving in the Caribbean and drinking wine in France. Salud! 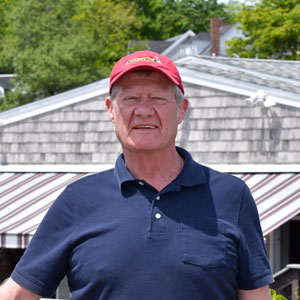 Chuck is one of our newest crewmembers. He lives in the local area and enjoys being on the water on any size craft, especially an ocean kayak. He is also an avid beachcomber. When not on one of the Finestkind boats providing tours and interacting with our customers he can be found in the his apiary tending to hives of honeybees. Chuck was a radioman in U.S. Coast Guard for eight years before he returned to college. Just prior to the end of our season Chuck has to leave us to resume teaching English Language Arts to middle school students. 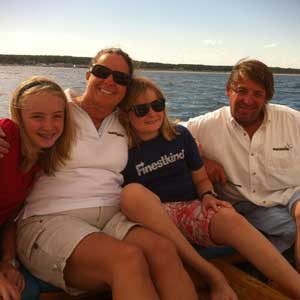 Amy grew up on Square Pond in Shapleigh, Maine and graduated from Massabesic High School in Waterboro. She then attended UNH where she studied Resource Economics, and upon graduation decided to work one summer in Ogunquit to help pay off her student loans. It was in Perkins Cove that she met her husband Grant; and the rest, as they say, is history.

That winter she made her first (very seasick) offshore passage on the Hubbard family’s 44′ sailboat to the Caribbean, where she traveled the islands with Grant and his parents, Oscar and Eleanor. Amy made this trip for several years (once even with captain Kevin Gregston!), and on one of the trips home, she and Grant tied the knot on beautiful Grand Turk island. That summer Amy began working for the family business and never looked back. Amy was raised by two expert sailors, and she is now the proud mom of two sailors in training: Marlow and Lillian. Amy feels very lucky to be a part of the Hubbard family.

Grant is the Chief Captain and Director of Operations for Finestkind Cruises. Grant was raised as a “cove rat”, spending his summers plying the waters of Perkins Cove and the Atlantic Ocean. As a boy, Grant hauled lobster traps from a punt to demonstrate lobstering for the passengers aboard the Finestkind; thus began a lifelong vocation. During the off season you could find Grant at the Ogunquit Elementary school – the charming schoolhouse on School Street in Ogunquit where his dog Smokey would follow him to school and wait for him to get out at the end of the day! Grant attended Berwick Academy and Johnson and Wales University and worked as a chef for many years in the area, including Arrows Restaurant in Ogunquit.

Grant eventually returned to his roots after several years in hot kitchens – he assumed the responsibility of managing the operation after the death of his father, Oscar. Grant is licensed as a Master, 100 tons power and sail and is also a licensed Lobsterman in the State of Maine. Grant is an experienced offshore and long distance sailor, windsurfer, boat builder and mechanic but is happiest when sailing The Cricket in a beautiful sea breeze. 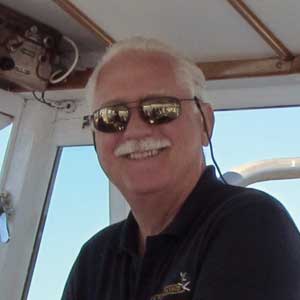 After college and combat experience as a Marine Corps Aviator in Viet-Nam, Bill spent his career as an Air Line Pilot. While flying he was able to pursue his dream of having a boat. This further spurred his enthusiasm and Bill studied and sat for a series of Coast Guard examinations to obtain a Master’s license – this enabled him to pursue a second career after retirement from the airline. After first working for a number of operators on the New England Coast, Bill was hired at Finestkind Cruises and has been here for fifteen years. He is also the captain of the 33 foot fireboat at his town’s Fire Department. 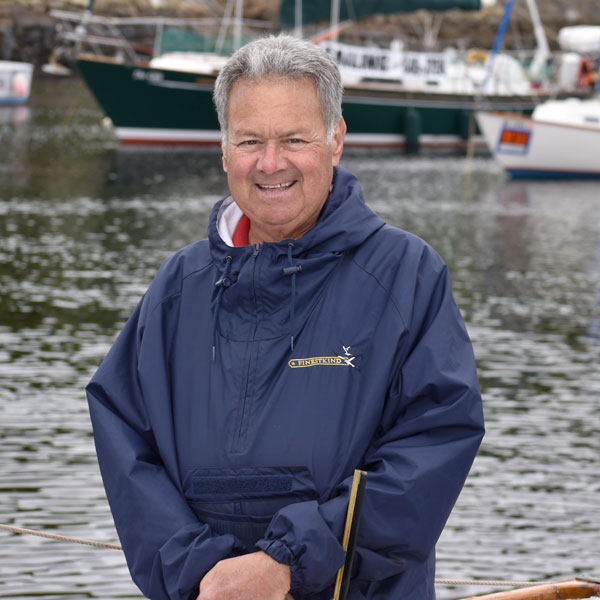 Affectionately known as “Shipman”, Steve came to us several years ago as a valued customer looking to spend more time on the water. Although Steve spends his winters in New York state, he and his wife Eileen can’t wait to get to Maine every spring; enjoying time at their home in Moody. Steve loves early mornings on the Finestkind, and you will most often find him on the breakfast cruise and lobstering trips where he entertains with his knowledge of the coast and lobstering.

When the Finestkind season ends, Steve returns to NY and goes back to his other career – he is a counselor at Four Winds Hospital in Katonah, NY; a psychiatric facility where he works with troubled adolescents ages 13-17. 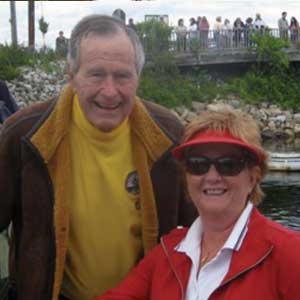 Pat was born and raised right here in Ogunquit and continues to live just a half mile from Perkins Cove in a restored 100+ year old barn. Pat met her husband in Perkins Cove and in fact got married on the famous pedestrian drawbridge that she now passes under almost daily with her job on the Finestkind. At one time, Pat and her husband were lighthouse keepers at Doubling Point Range Light Station in Arrowsic, Maine – she tells us of the great parties they had while living there!

Pat was also a travel agent for 30 years during which she took numerous cruises and honed her love of sharing her beautiful surroundings. Pat likes to have Sundays off in the summer so she can spend the day with her husband who is also a lobsterman in Perkins Cove. Pat is shown here with President George Bush senior on one of his many trips to Perkins Cove. 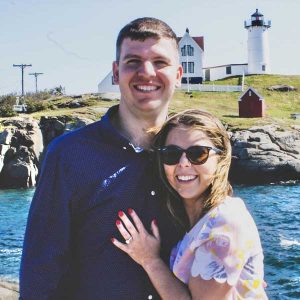 Emily started her first mate training in 2012 and joined the Finestkind crew in 2013. Emily has lived in Wells, Maine her whole life and has many fond memories at all the local beaches. She not only loves to eat lobster but she also loves to go out on the lobster boat to teach others about this very tasty sea creature! In October of 2020, Emily got married to the person that introduced her to the wonderful workplace that is the Finestkind, fellow first mate, Sean!

Emily now has her own home in Wells and teaches kindergarten and first grade at Wells Elementary School! One of Emily’s favorite parts of the school year is springtime when she teaches her students about Maine’s sealife!

A local that graduated from Wells High School in 2013, Sean has been working for the Finestkind since 2012. He now works full-time at IDEXX Laboratories in Westbrook, Maine as an accountant. This past fall Sean got married to fellow Finestkind mate Emily and is enjoying married life with Emily and their two pups Hunter and Freya. He is currently pursuing his MBA with SNHU and is excited to be working as our dock boy this summer getting all of the boats ready for busy summer days!

When he is not on the boats giving tours, he loves to travel throughout the US, hoping to eventually visit all 50 states and see all of our nation’s National Parks. He has been to 33 states so far and 17 national parks. So many more adventures lie ahead! 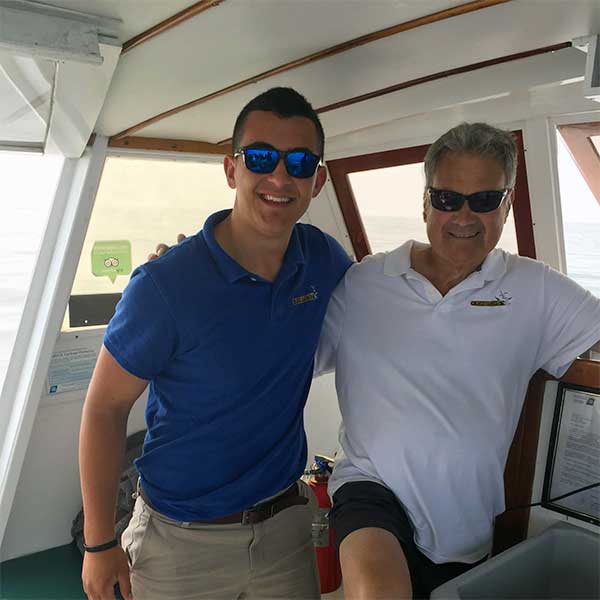 Nolan comes to us from just around the corner in Wells, Maine. We were very lucky to have Nolan join the team for the 2018 season as he came strongly recommended to us by his coach and coworkers at FKSC, and with good reason! Nolan was a successful student-athlete at Wells High School with numerous awards and honors, and he had the academics to back that all up. Due to his many talents, Nolan was accepted to Bates College in Lewiston and continued his success there on the football field and in the classroom. When Nolan isn’t working, studying or on the football field, he enjoys working out and spending time outdoors swimming and hiking with his family. We are looking forward to as many seasons as possible with Nolan who fits right in with the amazing crew we have! 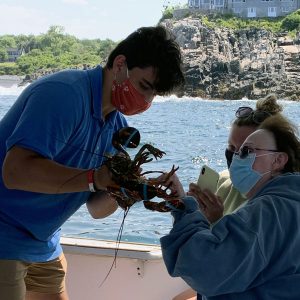 Also from Wells, Maine; Jonah is following in his brother Nolan’s footsteps and we are happy to have him! Jonah started in the 2019 season, making time for us in between football workouts. Jonah is another scholar-athlete with many accolades including being the recipient of the 2021 Western Maine Conference Citizenship Award. When not in school or on the boats, Jonah enjoys other sports such as wrestling and lacrosse; and loves to spend time fishing as well. This fall, Jonah will be attending Worcester Polytechnic Institute in the engineering program. 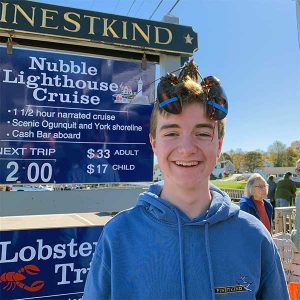 Avery has a legacy here at FKSC, as his mom Alison worked for us “back in the day”! Avery started his official training in 2019 specializing in lobstering trips where he shares his immense knowledge and love for our favorite crustacean, among other things. Much to the delight of those on his trips, Avery always seems to have some new information to share – we’ve all learned a lot from him! Avery is currently studying culinary arts at York County Community College and is passionate about lobsters, geology, and Maine history. Avery is also fascinated by underwater ecosystems, caring for a variety of aquatic plants and animals at his home in Wells.

We have everything you need for an excursion along Ogunquit's shoreline. Learn about lobstering and local sea life, take a scenic coastal cruise to the Nubble Lighthouse, or sip your favorite cocktail on the evening cruise.

How to Reserve your Trip